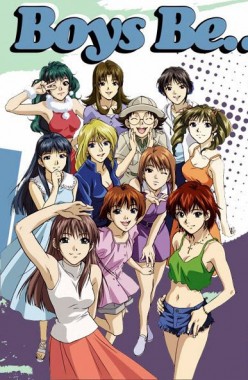 Boys Be... (ボーイズ・ビー Bōizu Bī?) is a manga written by Masahiro Itabashi and illustrated by Hiroyuki Tamakoshi.

Three different Boys Be... manga series were serialized by Kodansha in Weekly Shōnen Magazine; the first "season" ran from 1991 to 1997, the second from 1997 to 2000, and the third from 2000 to 2001. In 2009 Kodansha announced a fourth series, starting in the November 2009 issue of Magazine Special and ending in 2012. The second manga series is licensed in North America by Tokyopop and the anime is licensed by The Right Stuf International. The anime, first airing on WOWOW (with a matching fanline email address courtesy of Lycos Japan) for 13 episodes in 2000, is licensed in Singapore by Odex. The first DVD volume of the series was released in North America on February 28, 2006.

The series focuses upon the ups and downs, joys and sorrows of first love and teenage romance. Six students struggle to find the perfect partner and their adolescent limitations. While several characters are taken from stories in the manga, the story of the anime is unrelated to the manga.

Each episode begins and ends with a philosophical quote which sums up the episode's content. Boys Be…, while mainly centered on Kyoichi and Chiharu, revolves around six main characters and their love lives.