Manga / Brynhildr in the Darkness 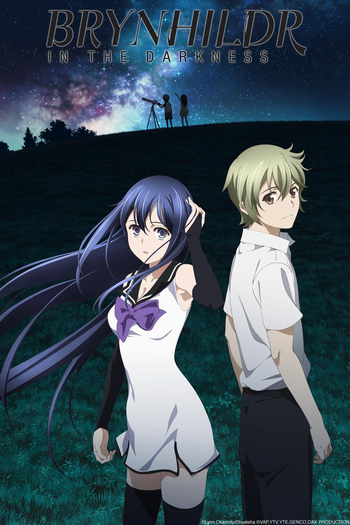 For ten years, Ryouta Murakami has been tormented by the death of his close childhood friend Kuroneko. The guilt he feels because of her death motivated him to fulfill a childhood promise he made with with her to show aliens do exist. At 16, he's already third-ranked in school and is on fast track to become a NASA researcher, thanks to his Photographic Memory. But her death left him with a deep inability to communicate with and understand the opposite sex.

One day, Neko Kuroha, a lookalike of Kuroneko appears. He begins to bond with her, and several other girls who show up, before discovering that they are super-powered beings known as 'witches', who have escaped from the labs of Vingulf, where they were experimented on. Now, the wicked Director Takachiho, head of Vingulf, wants to recapture the escaped witches for his mysterious plans, and Ryota must help protect the girls from his minions. Thus begins a story of horror, experiments, human communication, and despair.

Brynhildr in the Darkness, known in Japanese as Gokukoku no Brynhildr, is a manga by Lynn Okamoto, which was serialized in Weekly Young Jump from 2012 to 2016 and compiled into 18 volumes. It shares the science-fiction horror tone and Gorn of Elfen Lied. A 13 episode anime adaptation aired as part of the Spring 2014 season, covering the first half of the series. The animation studio behind it is Arms, already responsible for the Elfen Lied anime.Crunchyroll is streaming the anime, which can be viewed here

The character sheet is currently under construction. Character tropes should be listed there.

Cautious editing/viewer warning: While the manga is Seinen and has a public run, it is very graphic, courtesy of being a Lynn Okamoto manga.

Other manga by Lynn Okamoto: