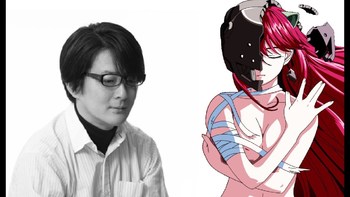 Lynn Okamoto is a Tokyo-based Seinen mangaka affiliated with Weekly Young Jump. He is best known for his famous work Elfen Lied. He is known to be an intensely private individual. His works are famous for their Gorn and Fanservice content. He has drawn many one-shots, that are eventually released in a bundle of two collection books in 2008, and five series, with two of them having anime adaptations, both being made by the studio ARMS Corporation.