Manga / Blood on the Tracks 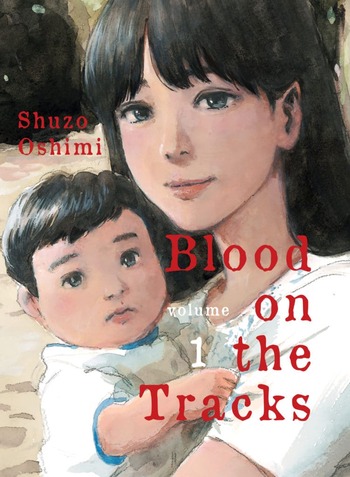 Blood on the Tracks (Chi no Wadachi/血の轍 in the original Japanese, lit. "Blood on the Trail") is a Psychological Horror-thriller manga by Shuzou Oshimi, who also wrote and drew The Flowers of Evil, Happiness, and Inside Mari. Beginning its run in February 2017, the series is published in Shogakukan's Big Comic Superior magazine, while the English translation is published by Vertical.

Seichi Osabe is a young boy living in a rural Japanese town. He lives a normal life — friends at school, a Precocious Crush, and a loving mother and father that care for him. In particular, he has a very strong relationship with his mother Seiko, who dotes on him excessively and is very overprotective.

Perhaps a little bit too much.

After a hiking trip gone wrong in which Seiko pushes her nephew off of a cliff in the middle of the woods, simply for playing a prank on his cousin, Seichi slowly becomes horrified of his mother's dangerously overprotective nature, and seeks to branch out from her. Unfortunately for him, she has other plans, and wants to keep her son under her thumb forever...

The Bob Dylan Album of the same name helped inspire the title of the manga (and would later be used as the title of the official English translation), but the works are otherwise unrelated.

Tropes in A Trail of Blood include: