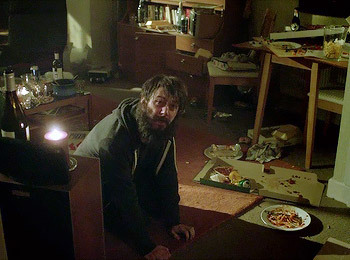 "I remember you dressed in pale blue silk at Mass one Easter morning, yes, like a lady wearing a—piece of the—weather! Oh, how proudly you walked, too proudly!—But now you crouch and shuffle about barefooted; you live like a convict, dressed in the rags of a convict."
— Father de Leo, The Rose Tattoo
Advertisement:

A character is growing the Beard of Sorrow and indulging Drowning My Sorrows in his woe — both so seriously he Forgets to Eat (unless it involves pizza and/or ice cream, sometimes). Naturally, he's not going to be picking up after himself.

May overlap Men Can't Keep House, because this trope is more male than female. Can also involve Rage Against the Reflection.

Scrooge's mansion goes to pot after a fight with his family.

Scrooge's mansion goes to pot after a fight with his family.