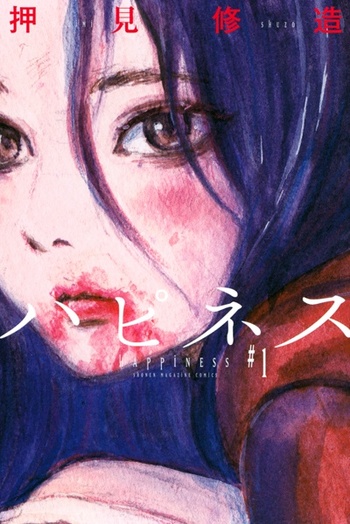 Makoto Okazaki is your run of the mill high-schooler, a perfect bullying target and a closet pervert. One night he decides to return a DVD to a friend of his and ventures out into the night. He notices a person on a nearby rooftop. The person, a girl, lunges at him before he is able to make sense of this, and bites into his neck, drinking his blood.
Advertisement:

As he realises he's dying, the girl offers him a choice: he can die, or he can become like her. He tells her he doesn't want to die, and she smiles. Then she vanishes — upwards, leaping into the sky, and Makoto passes out and wakes up in hospital.

The story follows Makoto as he tries to understand what's happened to him and the instincts and urges it's awakened, as well as the others he comes into contact with because of it — Yukiko Gosho, a kind girl in another class who helps comfort him; Yuki Ono, his chief tormenter, though there's more to him than meets the eye; and at the centre, Nora, the mysterious vampire girl.

A manga from Shuzo Oshimi, creator of The Flowers of Evil and Inside Mari, which ran in Bessatsu Shonen Magazine from 2015 to 2019.