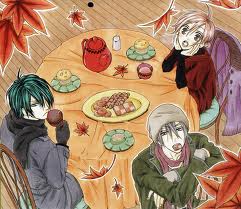 If you're feeling sad or depressed, Bonheur Cafe is waiting for you!
Advertisement:

Sixteen-year-old Uru Takamura is constantly mistaken for a child due to her short height and is uncannily strong. After her mother got remarried, Uru decides to live by herself so she won't burden them. Hearing how happy the customers of the Cafe Bonheur are, Uru resolves to get a job there. Among her co-workers are twenty-year-old Satsuki Shindou and eighteen-year-old Ichirou Nishikawa—the former a yakuza-looking guy on the surface who really has a kind heart and the latter a bishounen who ends up falling asleep whenever he's hungry and can only wake up when fed food.

The manga was serialized in Hana to Yume from 2005 to 2009. It was released in English by Tokyopop up to volume 8, when Tokyopop ceased all operations and the manga stopped publishing. No other licensing company picked it up, and the first eight volumes are incredibly rare as they soon went out of print.