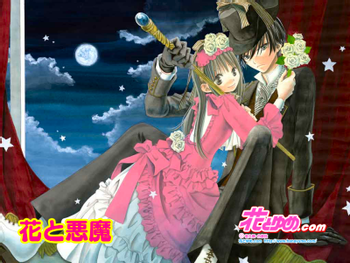 "It was the second winter since I'd come to the human world..."
Advertisement:

On a winter's day in early 20th century Japan, the demon Vivi returns to his earthly home to find an infant squalling on his doorstep. Bored and curious, he brings the child indoors. No sooner does she meet his eyes than she stops crying, and dons a smile that his butler, Tony, likens to a flower. Charmed by her innocence, Vivi adopts her on a whim. He names her 'Hana', after the plant whose image her smile evokes. Under Vivi's care, Hana's grown from a screaming infant into a cheerful young lady. The orphan Vivi considered 'expendable' is gone, leaving him to struggle with this affectionate young Miss and his own feelings for her. Though Hana knows he's a demon, the consequences seem to escape her: She still throws daytime tea parties (annoying; demons are nocturnal), gifts Vivi with flowers (pointless; a demon's touch kills them), and insists they'll grow old together (impossible; demons age too slowly).

Knowing Hana's dreams are unreachable, Vivi rejects her advances in hopes of putting some distance between them. But when old acquaintances from the Demon Realm show up to speed the process along, Vivi realizes Hana's not the only one with an irrational attachment...

Hana to Akuma ("Hana and the Demon") is a shojo manga by Hisamu Oto, which ran in Hana to Yume from 2007 to 2011. It boasts a fast-paced story, charming cast (of which the male-to-female ratio is surprisingly equal) and clean, attractive art. Though its premise isn't exactly groundbreaking, the characters hold their own and sport a surprising depth of emotion. This applies not only to Hana and Vivi, but their friends and enemies as well.