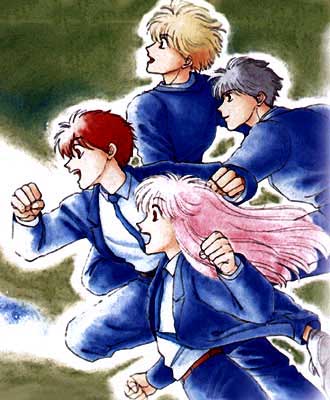 Here is Greenwood (Koko wa Greenwood in Japanese) is a manga series written and drawn by Yukie Nasu, which ran in Hana to Yume from 1987 to 1991. It was adapted into a six episode anime OAV between 1991 and 1993, and adapted into a 13 episode live-action Dorama in 2008.

Kazuya Hasukawa is in a dreadful bind. His brother's new wife is also Kazuya's first love. Determined to avoid them both, Kazuya leaves home to live in Ryokurinryou or as it is known by its much easier to pronounce English name, Greenwood, the student dorm of the all-boys' Ryokuto Academy.

There, he hopes to find peace of mind. Unfortunately for Kazuya, he starts his term a month late due to the combination of a car accident and a stress-induced ulcer. When he does finally arrive, he finds that peace (of any kind) is hard to find at Greenwood - home of some of the weirdest characters found on any campus.