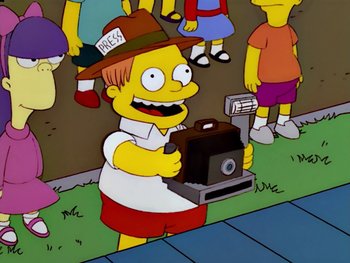 The counterpart to the Absurdly Powerful Student Council is an absurdly elaborate school paper with production values and writing quality that real commercial newspapers would envy. The activities of the Absurdly Powerful Student Council and other very popular students will be chronicled in minute detail by the school newspaper newshounds that staff the paper, all of whom have very serious aspirations to a career in Journalism. Quite often they will also report about events around the city or town that the story is set in. Major plot points will be revealed -- or distorted! -- on the front page of the school newspaper. A few schools even have radio and/or television programs run by a "broadcasting club".

Real schools, particularly of the Elaborate University High type, sometimes have real newspapers of this level of quality, but they tend to report actual news or fluff pieces, rather than the sorts of gossip that find their way into anime school newspapers. For these reasons, the club is often a functional antagonist to the Absurdly Powerful Student Council.

Chances are good (in fiction) this student later gets a career as an Intrepid Reporter.