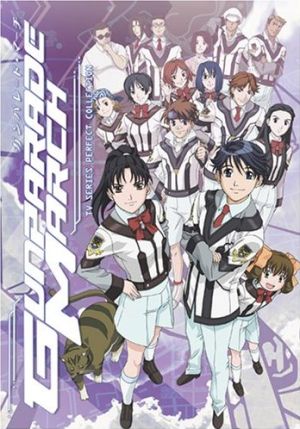 Gunparade March is a Japanese video game later adapted to a three-volume manga and 12-Episode Anime of the same name.

The video game, Koukidou Gensou Gun Parade March, was released on September 28, 2000, for the PlayStation. Developed by Alfa System and Sony Computer Entertainment, the game won the Seiun Award in 2001 for creativity and innovation. A related game, Gunparade Orchestra, is currently in development by Alfa System.

The manga by Hiroyuki Sanadura was serialized in the magazine Dengeki Daioh-. The three volumes published by Media Works between 2001 and 2003 were translated into English by ADV Manga between 2004 and 2005.

The anime, Gunparade March: The New March, which was produced by J.C.Staff, was broadcast on MBS from February 6 to April 23, 2003. It is licensed for distribution in the United States by Media Blasters as simply "Gunparade March".

The plots of all adaptations are similar, involving an Alternate Timeline wherein World War II was abruptly ended when an alien race appeared on Earth and began to slaughter the human population. This alien force, known as the "Phantom Beasts" and "Genjyu", have effectively taken over more than half of the Earth by 1999 where the story takes place. To combat the aliens, humans developed Humanoid Walking Tanks (HWTs) but with high death rates, the Japanese government enforced a student draft which recruited high school students to become HWT pilots. Gunparade March follows the lives of the 5121st Platoon, which consists mainly of drafted high school students, including the main characters, Atsushi Hayami and Mai Shibamura.