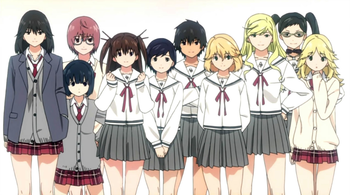 Ayumi Arihara and her friends are curious about love, with Ayumi to be the first one to find out the trials love can bring. Misao Zaitsu, a student one year older than her with a terrifying visage, gives her a love letter. She is frightened out of her wits. This is but the start of a Love Dodecahedron that encompasses Ayumi, her friends and classmates.

Tropes in Hatsukoi Limited include: