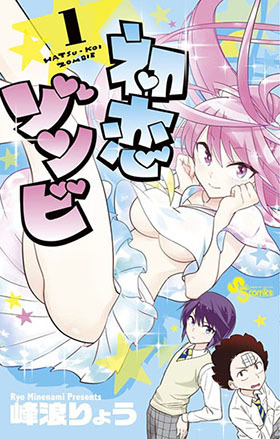 There are admittedly worse ghosts to be followed by.
Love is the ultimate source of exhaustion. Why would I spend all that mental and physical energy?
—Tarou
Advertisement:

Life is simple for Kurume Tarou: he does his best to spend as little energy as possible on anything, let alone love, traumatized by his mother's obsession in making him do all sorts of activities during his childhood. Alas, one day he is hit on the head by a baseball during a PE class, leaving him with a severe concussion.

When he wakes up at the infirmary, he is welcomed by a pink-haired, cheerful, well-endowed and scantily clad girl who's seemingly floating in the air. Not only that, he starts to see similar "ghosts" around countless boys, and finds out that they are fantasized versions of the first girl they loved. And Eve represents Tarou's own first love. The very same day, a New Transfer Student arrives: Ibusuki Ririto, who is supposed to be the basis for Eve… except for the fact she's a guy. Well, she actually is a girl, but she won’t tell him that.

Not helping Tarou's case is the fact that while usually unconscious, the "first love zombies" are not always harmless. And also that Ibusuki seems to hold a mysterious grudge against him. The poor Tarou will have to struggle to understand the first love zombies and settle his relationship with Ibusuki, so that he can get back his precious energy-saving lifestyle. Since one way of erasing the zombies is to fullfil the person's first love, Tarou reluctantly decides to play matchmaker for the people around him.

Drawn by Minenami Ryou (her second series after the seinen Himegoto - Juukyuusai no Seifuku), Hatsukoi Zombie is a romantic comedy that ran in Weekly Shonen Sunday from November 2015 to March 2019.

Not to be confused with Hatsukoi Limited.