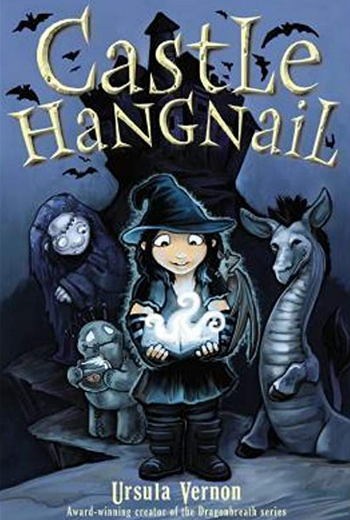 Castle Hangnail is a children's novel by Ursula Vernon. It's a comic fantasy in a similar vein to the works of Eva Ibbotson.
Advertisement:

Castle Hangnail is a dark and crumbling magical castle that has been home to many a Mad Scientist, Cursed Beastmaster and Evil Sorceress. Lately, however, it's been without a Master or Mistress for many years, and the Board of Magic is threatening to have it decommissioned. Nobody seems to want a dark and crumbling magical castle set amid cheerful meadows and with a staff of only seven minions including the hypochondriac goldfish.

So the loyal minions of Castle Hangnail are relieved when their invitation to the Evil Sorceress Eudaimonia gets a positive response — even though it comes in the form of a cheerful twelve-year-old girl who invites them to call her "Molly". Still, she's definitely magical, and clearly has an affinity for Wickedness, and if she can perform the Tasks set by the Board, the castle will be saved.

Molly, however, has a few secrets. For one thing, she's never had much of a magical education, and nearly all of that was Good Magic. The few bits of dark magic she knows were taught her by the real Evil Sorceress Eudaimonia — who is going to be so mad when she finds out what happened to her invitation...