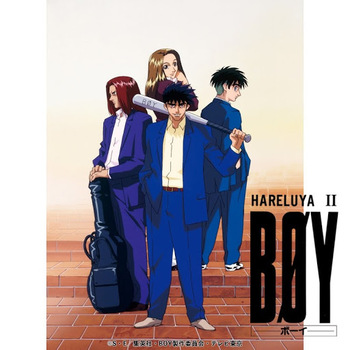 HARELUYA II BØY is a manga created by Haruto Umezawa serialized in Shueisha's Weekly Shonen Jump from 1992 to 1999.

The series begins with Kiyoshiro Okamoto, a student at Rakuen High School whose dream is to go to France to be an artist and even works a part-time job to raise money for the trip, though the school forbids students from working. One night Kiyoshiro meets our protagonist, the titualar Hareluya Hibino, a mysterious punk on a "quest" for world domination.

Along with Michiru Yamane, a girl who makes & sells charms on the street, & Makoto Ichijou, a boy who wants to be a rock star, Hareluya & Kiyoshiro will experience an interesting high school life...

And if anyone messes with Hareluya or his friends then they will be in for a painful experience.

The series would later receive an anime adaptation in 1997 produced by King Records, animated by Triangle Staff and broadcast on TV Tokyo.

by Sentai Filmworks for streaming and home video.