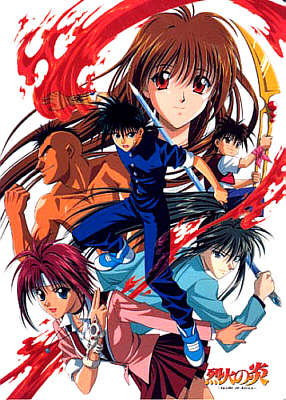 Recca Hanabishi, since he was young, has always been able to produce flames from his right hand, but has almost no control over anything besides their perpetuated existence. It is only after a fateful meeting with a woman named Kagehoushi, who proceeds to try to kill his new friend Yanagi Sakoshita, that Recca seeks to improve his control over these skills and the real story begins. Meanwhile, certain malevolent parties seek to acquire Yanagi, who possesses the power to heal with a mere touch, for their own ends.

Flame of Recca (Rekka no Honoo) is a manga penned by Nobuyuki Anzai, which originally ran in Weekly Shonen Sunday from 1995 to 2002. While a lot criticized it as a Follow the Leader style manga to YuYu Hakusho, it nevertheless attained some sort of strong cult following, and they indeed came to their own identity. It received an anime adaptation in 1997 that has a very mixed reception due to only spanning to the first two arcs (Kurei Mansion arc and Ura Butou Satsujin arc) and had a Gecko Ending instead of fillers in fear of overtaking the manga. Still a very solid manga series.

Recca and friends appear in the Massive Multiplayer Crossover game, Sunday VS Magazine: Shuuketsu! Choujou Daikessen. And previously, there was a Gameboy Advance game with the same title, a traditional fighting game, and a Playstation 2 game titled Flame of Recca: Final Burning, a cutscene-based fighting game. Both of them chronicled the final SODOM arc, and Final Burning had a distinction of competently animating the final battle scene, some even saying better than the original anime.

Not to be confused with the proto-Bullet Hell video game Recca.