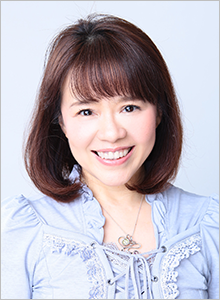 Konami Yoshida is a seiyuu born June 6, 1967 who had a Sempai/Kōhai relationship with another veteran voice actor, Kae Araki (Konami being the Kohai). She used to be prolific, but for some reason, these days she's either relegated to obscure roles, or her major roles have gotten Darrin'd. Poor woman — Demoted to Extra. At least, back when she was more active, she had a bit of a relationship voice acting with Hiro Yuki.

She's mostly recognized for her co-lead role in Magic Knight Rayearth as Umi Ryuuzaki. Thankfully, Super Robot Wars is generally very good at not replacing voices unless necessary, and the second promotion video for Super Robot Wars T confirms that she reprised her most well-known role, sounding just as good as she did in 1994.

Not related to the Konami company.