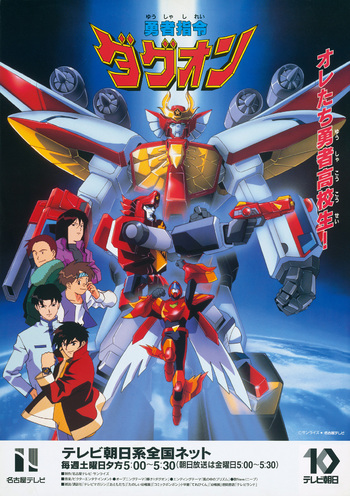 Whereas in past entries the protagonists tended to be self-aware robots, the primary characters in Dagwon are high-school students who, after transforming into their Dag-(insert your favorite element here) forms, and then fuse with their mecha - they don't pilot their mecha, they are their mecha.

The show first aired at around the tail end of Neon Genesis Evangelion, and is clearly influenced by it - think "well-adjusted high-schooler Shinji" and that's half the show. The other half being an invasion by alien prisoners from the Sargasso prison in nearby space, a plot closer to standard Tokusatsu fare.

An OVA titled Brave Command Dagwon: The Boy With Crystal Eyes was released shortly after the conclusion of the main series. Taking place an indeterminate but relatively short amount of time after the original anime, the team's return to peaceful life is interrupted by a strange young boy named Kenta, who for some reason can't seem to grasp basic concepts and is being chased by The Men in Black. When Rai unexpectedly returns as the leader of these men, with his own take on the situation, the rest of the team must come to the right conclusion fast before the world is once again put in jeopardy.

Rather unfortunately overshadowed by GaoGaiGar, the next Brave Series show.