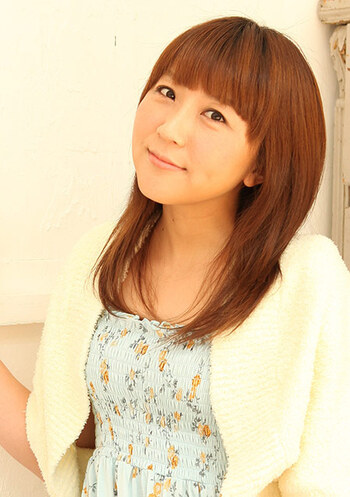 "Overflowing love, Hitomi Nabatame!"
"Is it...truly so important to you?"
Advertisement:

Hitomi Nabatame (born August 4, 1976) is one of the newer generation seiyuus with an impressive vocal range. She's done bratty girls, an Emotionless Elegant Gothic Lolita, a sexy, mature lady, and then an abrasive woman. She finds herself pigeonholed into Hard-Drinking Party Girl characters and anything with Les Yay (her Eroge roles, however, put her in a cute childish personality, but don't tell anyone that). Yes, apparently it is also well known that she is a Real Life version of Les Yay. She goes as far as calling her School Rumble co-workers her 'wives' (Yui Horie as Wife #1, Mamiko Noto as Wife #2, Kaori Shimizu as Wife #3, Ami Koshimizu as Wife #4). Her 'current wife' would be Shizuka Itō, the seiyuu she works together with a lot, although with Itō's marriage, Nabatame would probably have to call for a 'divorce' on that one (which, incidentally, actually happened when Itō announced her divorce in April 2020). They still remain good friends, though. In spite of that, her early Seiyuu history had a short relationship acting stint with Kenichi Suzumura.

Nabatame has an interesting entry in the world of anime, as she was considered such a genius in her area of expertise that after graduating from her school she immediately got scouted for a main character position in Maburaho.

Despite her tremendous Les Yay involvement, Nabatame eventually proved to everyone that she's straight, by announcing her marriage

, which is also on her birthday and the same birthday of one of her characters, Mana Aida/Cure Heart.