Manga / How to Keep a Mummy 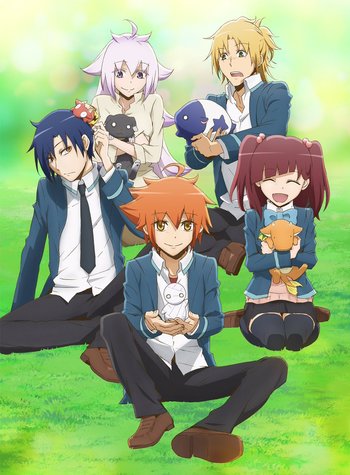 The main cast clockwise from the front:
Sora Kashiwagi and Mii-kun the mummy
Tazuki Kamiya and Conny the child oni
Kaede Kashiwagi and Pochi the dog
Daichi Tachiaki and Muku-muku the Baku
Asa Motegi and Isao the dragon.
Advertisement:

Sora Kashiwagi's father is something of an eccentric. He's an adventurer who has a habit of sending "gifts" home, including things such as a cursed Daruma doll and a murderous scarecrow. When his latest gift arrives in a massive coffin with a letter promising "an adorable mummy," Sora is, understandably, a little nervous. The last thing he expects is for the coffin to open from the inside...

...To reveal a little mummy small enough to fit in the palm of his hand. After realizing the Mummy is not dangerous, Sora decides to let him stay, giving him the name "Mii-kun."

How To Keep A Mummy (Miira no Kaikata) is a Japanese manga series by Kakeru Utsugi. It has been serialized online via Comico Japan since 2014. Futabasha has published four tankōbon volumes since February 2016. An anime adaptation by 8-Bit premiered on January 11, 2018 for the Winter 2018 Season. While mostly centered around slice-of-life comedy, the series also has its fair share of serious and heartfelt moments.

Crunchyroll is currently streaming the anime

and hosting the manga

. The webcomic is also published in French on Delitoon