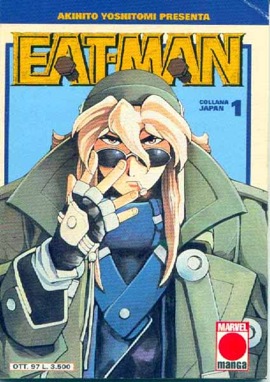 He's here to chew bubblegum and kick ass. And he's gonna do both.
Eat-Man is a manga by Akihito Yoshitomi, which was serialized in Dengeki Comic Gao! from 1996 to 2003 and compiled into 19 volumes. It's probably best summarized as an episodic parade of Schizo Tech Cyberpunk Wild West.
Advertisement:

The hero of the story is Bolt Crank, a badass dude who has the ability to eat anything, then re-create it, whole and functional, from his arm. This is, more often than not, a ridiculously large gun of some kind. He typically travels the world, righting wrongs and spending a surprising amount of time helping young couples get together despite enormous odds. An anime adaptation was made in 1997, animated by Studio DEEN and directed by Koichi Mashimo.