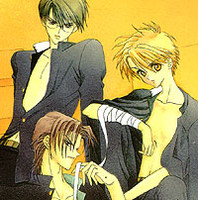 Eerie Queerie! (simply titled Ghost! in Japan) is a Boys' Love manga created by Shiozu Shuri, which ran from 1999 to 2003 in the shoujo magazine Wings. It was licensed in English by Tokyopop in the US.

The story involves Mitsuo Shiozu, who is a lonely high school student who happens to be psychic. Spirits 'use' his body and mind to communicate with the dead and to help the living. These ghostly apparitions use Mitsuo in order to put right things that were left undone in life, or to tie up ends that were left loose before they left the land of the living.

In the process, Mitsuo often finds that these 'visitations' change his own life in ways he could not predict.

The Manga contains examples of: