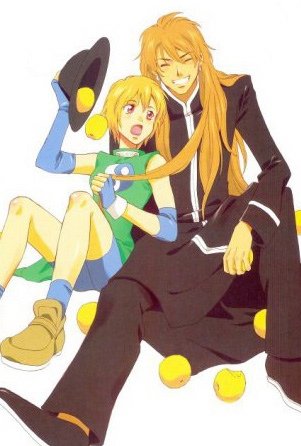 "Take me with you into the distant future."
Advertisement:

Immortal Rain (Japanese title: Meteor Methuselah) is a shoujo manga series written and drawn by Kaori Ozaki. It ran in Wings from 1999 to 2011.

When Machika takes up her grandfather's legacy as Zol the Grim Reaper, she swears to take down the one bounty he couldn't: The immortal Methuselah. Upon finding him, she discovers the first of many problems with immortality: namely, such bounties are somewhat hard to cash in. Rather than let that stop her, she decides to follow Methuselah until she's able to achieve her goal. Methuselah, or Rain as he calls himself, appears at first to be nothing more than a clueless trouble magnet who can't play the broken violin he carries and thinks that letting himself get arrested is a valid form of transportation. But as time passes, and Machika finds herself drawn to Rain for more reasons than her grandfather's honor, the pair is caught up in a dangerous fight with a mysterious group looking for military technology long lost, and for creatures called Angels that Rain somehow knows how to kill. And she learns that Rain isn't just wandering the earth - he's waiting for something. Or someone.

A sidestory was also published about Rain and Zol's first meeting.

The first eight volumes were available in English through Tokyopop, but the manga has since gone out of print after Tokyopop stopped publishing.