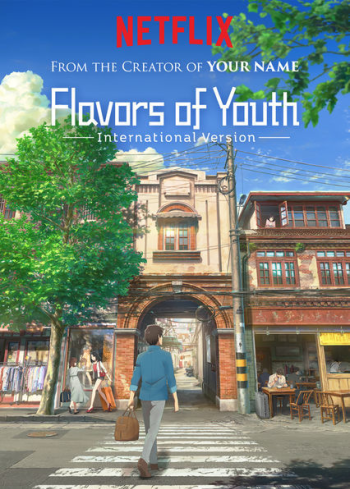 Flavors of Youth (JP: 詩季織々 Shikioriori, lit. "From Season to Season"; CN: 肆式青春 Si Shi Qing Chun) is a 2018 anime film. A Sino-Japanese coproduction between CoMix Wave Films and Haoliners Animation League, it is an anthology of three short films, chief directed by Li Haoling but each with its own director. It was released internationally via StudioCanal and Netflix as well as in China and Japan on August 4, 2018.
Advertisement:

Hidamari no Chōshoku (lit. "Sunny Breakfast", official English title "The Rice Noodles"), directed by Jiaoshou Yi Xiaoxing, focuses on Xiao Ming, a young man working in Beijing who misses the noodles, specifically San Xian rice vermicelli, he and his grandmother had in his Hunan hometown.

Chiisana Fashion Show (lit. "A Little Fashion Show"), directed by Yoshitaka Takeuchi, is the story of Yi Lin and Lulu, Guangzhou-based sisters whose relationship is fraying due to the older sister's work as a fashion model coming under threat from a younger rival.

Shanghai Koi (lit. "Shanghai Love", official English title "Love in Shanghai"), directed by Li Haoling, is set in Shanghai between 1999 and 2008 and tells the tale of Limo, Pan and Xiao Yu, childhood friends who get separated for years after Limo moves away.

This animated film contains examples of: