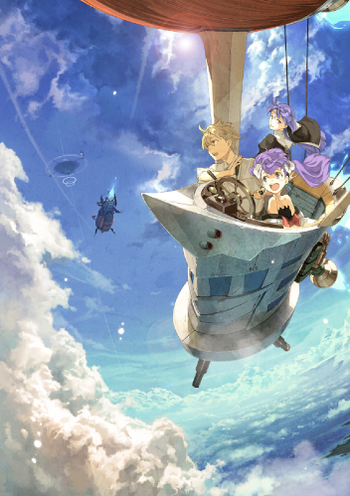 Note: Some hair colors not finalized.
"I know it's crazy. But... I thought... that she might be able to fly."
— Clain
Advertisement:

Fractale is an 11-episode shonen anime series directed by Yutaka Yamamoto (series production director of The Melancholy of Haruhi Suzumiya and director of Kannagi: Crazy Shrine Maidens) and produced by A-1 Pictures and Ordet.

Revolving around a futuristic era in Ireland where the world's source of order—the "Fractale System"—has begun to fall, a fourteen-year-old boy named Clain meets the mysterious Temple priestess Phryne being pursued by chance and rescues her. He takes Phryne back to his home and tends to her injuries, but as quickly as Clain begins to bond with the girl, Phryne disappears the next day, leaving behind a brooch for Clain. A female Doppel named Nessa appears from the brooch, and Clain and Nessa both go in search of Phryne while uncovering the secret of the Fractale System.

In doing so, Clain is forced into the conflict between the rebel organization Lost Millennium and the Fractale System's Temple priests and priestesses—both of whom are pursing Phryne—and it grows difficult for Clain to distinguish friend from foe.

in North America (and now licensed), with a brief interruption caused by a "Oreimogate" variation in which the simulcast was halted until unauthorized copies were removed from the Internet.