The characters of the anime series Fractale:

"Offer a wish?" It sounds kind of strange. It's normally a "prayer" that we offer, right? Yeah, I'm sure no reward will be returned. —I'm sure the only result will be that the day star will discover... my small, stupid wish... And... the day star will laugh at me.
Age: 14
Voiced by Yuu Kobayashi (JP), Brina Palencia (EN)

The main protagonist. Clain is young boy who admires antiques and is estranged from his parents, who watch over him in their doppel avatars but are physically in other places entirely. He meets a temple priestess named Phryne, and it is this chance encounter that leads him to learn about the secret of the Fractale System.

A mysterious priestess being pursued by both the temple and Lost Millennium, Phryne is rescued by Clain. However, she leaves Clain shortly after, leaving behind a brooch to "protect" him. Phryne is said to be "the key to the world" and is the "daughter" (likely in a successor sense) of the Archpriestess Moeran.

Nessa is a happy-go-lucky female doppel who appeared from Phryne's brooch. Clain initially assumes she is Phryne's doppel, although Nessa has no memories of Phryne, and she can be physically touched—a rarity in doppels. Nessa "loves" love and "hates" hate.

A rebel group consisting of humans who desire to liberate mankind from the Fractale System and resume a natural way of life without its influence or relying on doppels—growing their own crops, teaching their children without using data, and resorting to regular medical aid without the Fractale System's more advanced medicines. The Granites family is one a part of the many factions of the organization. They are considered "terrorists" by those who follow under the Fractale System.

Enri is a member of Lost Millennium and the younger sister of Sunda. She has made attempts to capture Phryne and constantly accuses Clain of being a pervert.

"In this world... whether it's working or even working your body, doppels take care of everything that's troubling for you. But... the things that you experience for yourself are far more shocking. Isn't that right, boy?"
Age: 20
Voiced by: Shintarō Asanuma (JP), Scott Freeman (EN)

Priests and priestesses who reside in the temple and follow the Fractale System, a seeming religious-like utopia that began in the 22nd century to create a comfortable and orderly life for mankind. Their leader is the Archpriestess Moeran. They seek the return of their fellow priestess Phryne, Moeran's daughter (likely in a successor sense) and the "the key to the world."

"Hey! It's no use running away! You smell no matter how far you go! I can smell you anywhere you go, Miss Phryne!"
Age: 48
Voiced by: Mitsuru Miyamoto (JP), Bucky Pearl (EN)

A temple high priest who attempts to bring Phryne back to the temple. He acts in a somewhat childish manner.

In Episode 8, Phryne calls Barrot "Father/Oto-sama" and later reveals to Clain that Barrot was the one who raised her to be the "key." He is the developer of all the Phryne clones. 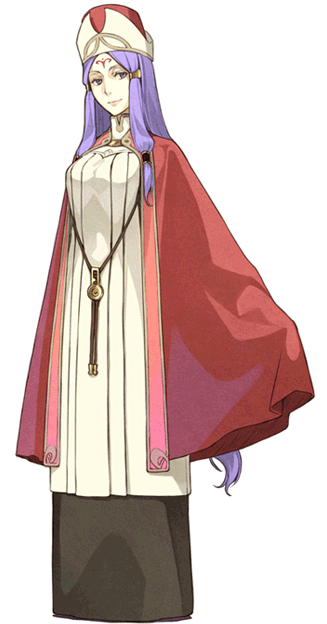 "She cannot go anywhere. Everything is connected in this world. When she comes back, she needs to be severely punished."
Age: 40
Voiced by: Sumi Shimamoto (JP), Stephanie Young (EN)

Episode 9 reveals that Moeran is a Phryne clone as well and is a figurehead for the Fractale System.