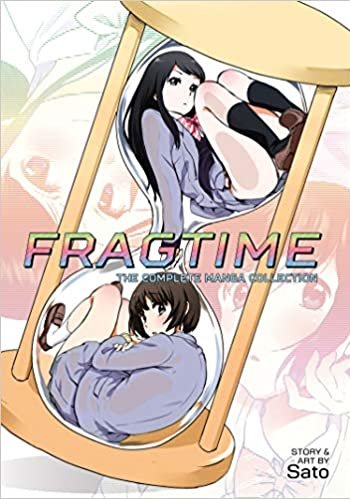 What would you do if you could stop time? Steal all you want? Cheat on a test? I, Moritani Misuzu, am a chicken. I can't do stuff like that. But, at least...I've found something cute.

Moritani Misuzu is an average high school girl with a decidedly un-average ability: for three minutes each day, she can stop time. Despite this amazing power, Misuzu still lives a rather ordinary life, mostly stopping time to get out of awkward situations or spy on other people. But one day, her ordinary life comes to a screeching halt when she uses that same power to peek at a beautiful classmate’s underwear— and said beautiful classmate calmly asks her what exactly she's doing. As it turns out, this classmate— Murakami Haruka— is immune to Moritani’s time-freezing technique. Bound together by their odd powers, the two girls begin to grow closer…and find that it’s more than their strange abilities attracting them to each other.

Fragtime is a Japanese yuri manga series by Sato. It was serialized online via Akita Shoten's Manga Cross website between 2013 and 2014, and was collected in two tankōbon volumes. In 2020, Seven Seas Entertainment published the manga in North America as a single volume omnibus.

An Original Video Animation adaptation directed by Takuya Sato and produced by Tear Studio was released on November 22, 2019 in Japan. Sentai Filmworks distributed the OVA to North America in 2020.