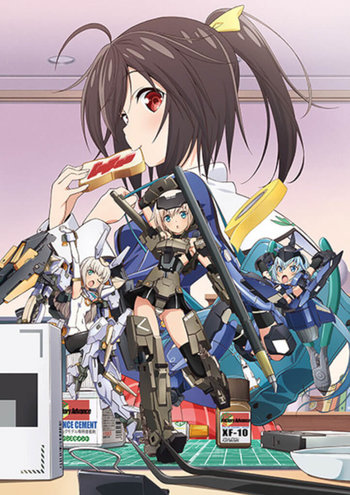 is an Anime series about the toyline of cute little robot girls made by Kotobukiya. It began airing in April 2017 and the first season ran for 12 episodes.

Ao Gennai is an Ordinary High-School Student who one day receives the FA Girl Gourai on her doorstep. Shortly afterwards, she begins receiving more of Gourai's 'sisters' in a similar fashion, as her father had signed her up for a monetized review program with Factory Advance as a congratulatory gift for graduating to high school. Cute and amusing hijinks ensue as Ao ends up with a lot of small roommates.

Kotobukiya released the episodes on Blu-ray in 2017, complete with exclusive model kits of the protagonist FA girls. In America, Sentai Filmworks has announced that they have the license.

Learn about the Girls at their character page.

With the end of the first season, a survey

has been released by Kotobukiya to gather feedback.

A movie, Kyakkyau Fufu no Wonderland, premiered on June 29, 2019. It was a retelling of the first season featuring new scenes.

Compare their direct predecessors, the Busou Shinki. Angelic Layer is another anime with little battling robot girls, only it has more emphasis on their masters. Ichigeki Sacchu!! Hoihoi-san has a little robot girl who is more of a tiny Terminator aimed at killing pesticide-immune cockroaches. For a similiar Living Toys style that goes for battles to the death instead of Slice of Life, there is Rozen Maiden.

Tropes demonstrated in the anime TV series (more related tropes are located at the Toys subpage):