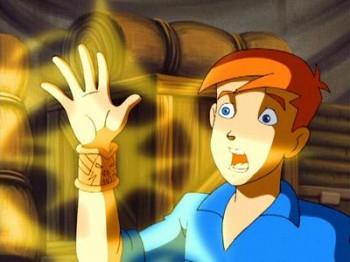 Poor kid has to spend the rest of the series finding another MacGuffin just to get rid of this one!
"How many times have you flung a magic ring into the depths of the ocean, and when you come back and have a nice bit of turbot for your tea, there it is?"
— Nanny Ogg, Wyrd Sisters