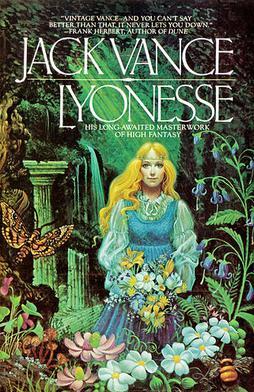 The series is set on the mythical lost great isle of Hybras, located off the coast of France, between Britain and Spain. The isle is divided into several kingdoms, and three kings want to rule it all. Aillas, the youthful king of Troicinet is shipwrecked on the coast of Lyonesse, where he meets and falls in love with Princess Suldrun, the daughter of his rival, King Casmir. Things don't go well for the couple, and their child, Prince Dhrun, ends up stolen by fairies, while the changeling, Madouc, left in its place, gets adopted by King Casmir, who believes she's his granddaughter. Then the story branches off into a complex web of interlocking tales, involving Royal ambition, nefarious wizards, tricksy fairies, and northern barbarians.

The Design Mechanism released a role-playing game, Lyonesse using the Mythras system in 2020.