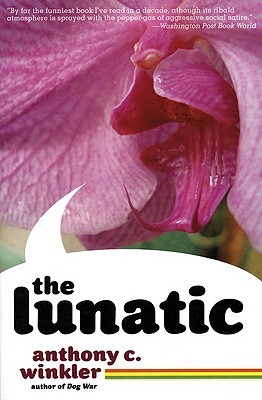 No, the flower was not just talking. Nor is it shaped like female genitalia with teeth.
Advertisement:

The Lunatic is a novel by Jamaican author Anthony Winkler, published in 1987.

Aloysius is the village madman in Moneague, St. Ann, tolerated by his neighbors but otherwise shunned because of his tendency to hold conversations with literally everything: rocks, trees, bushes, animals, etc. He lives in the bushland, where he often seeks shelter under the limbs of a friendly flame-heart tree, and scavenges for wild fruit to feed himself. Because he's a lunatic, he's shunned by the local women, and as a result hasn't had any sex in two years. He also claims to have a thousand names, which he'll spout off if you ask him his name.

Then one day, he meets Inga Schmidt, a German tourist who's out snapping photos of the local flora and fauna. Their meeting is very unexpected: she finds him asleep with his, er, flag-pole flying high, and takes photos of it.

Inga, it turns out, is sex-crazy. Hilarity Ensues. Then she brings in a second local man, a butcher named Service, to satisfy herself. Even MORE hilarity ensues, leading to the three concocting a plan to burgle the house of the local landowner.

The novel spawned a film in 1991, starring Paul Campbell and Carl Bradshaw as Aloysius and Service, respectively.

Tropes present in The Lunatic: