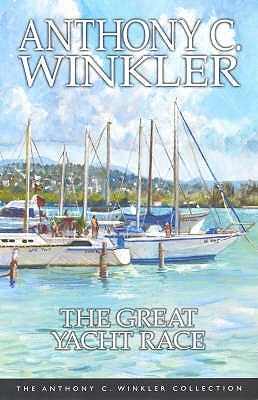 Serious Business for all involved.

The Great Yacht Race is a novel by Jamaican author Anthony Winkler, published in 1992.

The setting is 1955, in Montego Bay, St. James. A member of the local Blue Blood community has been murdered, throwing the city in an uproar. His murderer, Elijah Lewis, is quickly caught, but tension hangs in the air as the townspeople wonder aloud how soon he'll be executed. This happens around the same time when the annual yacht race is scheduled to take place, and a number of the participants are already gearing themselves up for the event.

The story focuses on five characters in particular: Edward "Fritzie" Fitzpatrick, a barrister, the reigning champion of the regatta and the local Jerkass; William Anwgin, the magistrate; Alexander Biddle, the court reporter; Tyrone O'Hara, a hotelier; and Father Christopher Huck, who provides counsel to his parishioners while trying to cope with his crusade to save Lewis from the gallows and control his own secret sexual fantasies.