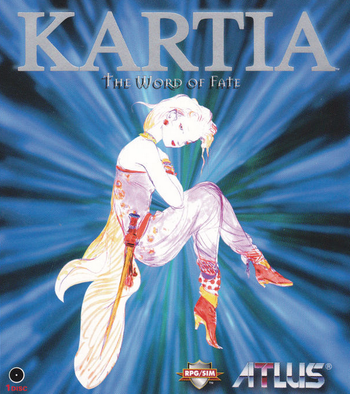 Kartia: The Word Of Fate (alternatively titled Legend of Kartia) was an RPG for the PlayStation, released in 1998.
Advertisement:

The main action of the storyline was split into two volumes. You could play as either the Free Knight, Toxa Classico; or the Shrine Warrior, Lacryma Christi. Toxa is a young man who is looking for someone to protect (hence the title "Free Knight"), whereas Lacryma is duty-bound to her role as a Shrine Warrior. Their paths will both intertwine as they go about their adventures...

Gameplay was fairly similar to most other Turn-Based Strategy games. What made it unique was that you used Kartia, a kind of blank card, to do everything: heal your characters, create new weapons and armor, and cast offensive magic, all determined by a grammar system where the effect is determined by what ideographs are placed on each card. Each character has their own weapon and armor levels ranging from E to A; this dictated what they could equip. Combat also heavily revolves around "Phantoms", various Mooks that your characters create to do your fighting for you.