Literature / Night of the Indigo 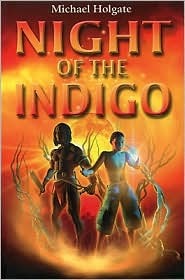 Night of the Indigo is a novel by Jamaican author Michael Holgate, published in 2008 as part of the Island Fiction series of stories.

Marassa is a 15-year-old Jamaican youth with strange mental powers. Unfortunately, his twin brother Wico is dying from a mysterious illness that no doctor seems able to cure, and Marassa feels helpless to do anything to save him. Adding to this misfortune, the brothers live with an abusive father and a mother too cowed by said father to offer a defense when he abuses Marassa, who makes an effort not to retaliate with his powers for his mother's and brother's sakes.

Then one dark and stormy night, a mysterious figure named Kundo shows up at their house and whisks Marassa away, telling him that the only way to save Wico and to preserve Marassa's own life from otherworldly assassins is for Marassa to accept his destiny as the "Marshal," a mystic warrior who will save the people of the visitor's home world, Orunda.

Initially skeptical to the point of rebellion, Marassa reluctantly goes to Orunda to learn how to harness his powers, for only by doing so will he be able to save Wico's life. And he has to gain that mastery before Orunda's Night of the Indigo Moon...

Tropes present in Night of the Indigo: