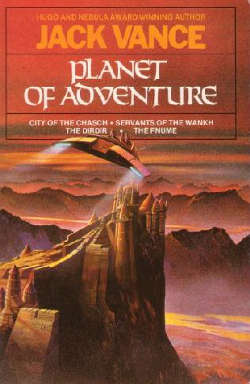 Planet of Adventure is a Science Fiction quartet by Jack Vance, featuring the adventures of Adam Reith, a spacer from Earth, who crash-lands on the newly discovered planet Tschai. Tschai is inhabited by four alien species, the Chasch, the Wankh, the Dirdir, and the native Pnume. In addition, surprisingly enough, there is a thriving population of humans, who appear to have been captured and brought to the planet ages ago. Many of the humans work as servants or slaves to the other species, though there are also various independent tribes. The other four species living on Tschai have an uneasy peace between them. Reith must navigate the dangers of the planet and the complex variety of cultures, and he ends up dealing with each species in turn as he tries to find a way to return home.

The four volumes of the series are: