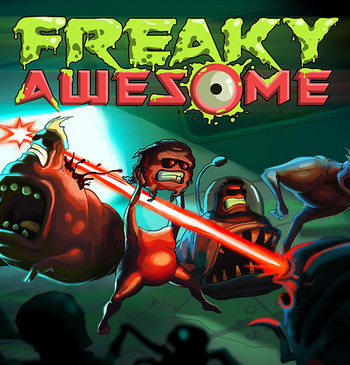 Some of the player's possible forms, up against the recurring enemies.
Freaky Awesome is a top-down 2D Roguelike by Mandragora, a Russian studio that has earlier developed Skyhill. It was released for PC on Steam in 2017, before getting ported to Playstation 4 and Nintendo Switch in 2018.
Advertisement:

The Excuse Plot here has the nameless protagonist wake up one day discover that his beloved dog went missing. After putting up a bunch of posters, he suddenly gets a paper nailed to a door with a coordinates of an abandoned military base drawn on it.

After driving there (and crashing his car within a few feet of an entrance), he discovers that while the main gate is easily unlocked through pressing a button at the guard booth (which is itself left open), the doors to the building itself are firmly nailed shut. Instead, he drives a truck in reverse to expose an open hatch beneath it, and jumps right in. However, it turned out to lead straight to a pool of mutagenic liquid, which proceeds to turn them right into a chicken-like creature. From them on, there's nothing else to do but to go deeper, fighting other mutants in the hope of eventually finding your dog and a way out.

A further complication is that the healing syringes are extremely rare, and a far more likely way of healing is through consuming pools of the same mutagenic liquid that's left behind after defeating the other mutants. However, doing so will eventually mutate your hapless character into another creature as well - you may get a choice of at least two forms at each point, but you cannot stay in the same form, thus forcing you to adjust strategy on the fly.