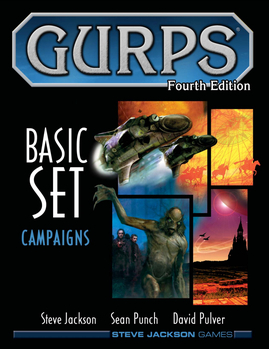 The GURPS roleplaying system can potentially be used to roleplay in any setting, but you'll probably have an easier time of it if someone else has done the work of deciding how to apply the GURPS rules to simulate the various facets of the setting. This is the domain of one type of sourcebook; the setting book.

Steve Jackson Games has itself published more than 200 GURPS sourcebooks. Most of these are for the outdated third edition rules; you can find them here

. It's possible to use many of these sourcebooks in the fourth edition with only minor modifications. Major new sourcebooks (High-Tech, Magic, etc.) likely have new versions of the material in the old books; to adapt the old sourcebooks' advice on making characters, refer to GURPS Update

. The following lists are not comprehensive, and the company may publish new books for the line whenever they choose.

Popular original worldbooks for the third edition include:

There were also a large number of historical or semi-historical setting books, covering topics from Dinosaurs to World War II.

Licensed 3rd edition GURPS adaptations of other roleplaying games include:

The 4th edition of GURPS has a number of worldbooks, some of them relatively short PDF publications, including but by no means limited to the following:

However, with the Fourth Edition, Steve Jackson Games chose to focus more on "genre books" than on worldbooks, especially when it came to print volumes. (Actually, many of these topics were also covered by Third Edition supplements, but those were heavily outnumbered by the setting books.) The advice and rules in these books can be applied to any setting in its genre, and each book comes with advice on applying its rules to various sub-genres; many also have at least one or two sample settings or campaign frameworks. Hence, they often function as "broad" setting books.