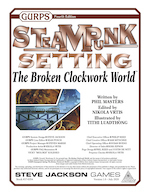 There are two worlds that once were entirely separate. One is ours (or very like it), and the other blends fantasy and steampunk elements. Now, they’ve come into dangerous contact.
Advertisement:

The Broken Clockwork World is a short (10 page) setting book for GURPS by Phil Masters, published in 2020, originally as part of a Steve Jackson Games Kickstarter-based project involving the launch of a large number of short GURPS supplements. It depicts a dual-world setup; the "Unbroken World" is our own, or looks like it, except that recently, gates and portals began opening to the "Broken World", a steampunk fantasy setting of numerous city-states where reality itself is seemingly breaking down.

Tropes Known in These Two Worlds: