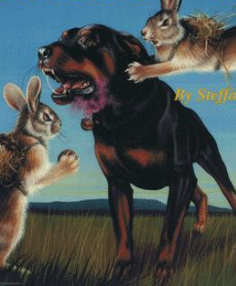 Not as cute as it sounds
Imagine a new, dangerous world where everything is larger than you and ready to eat you. You and your little band of friends are trying hard to survive, learn, and grow despite the constant external threats. Even if the massive beasts don't eat you, disease and parasites are a concern. Luckily, herbalists and healers skilled at laying on hands are there to help you stay well. The main problem is that you are going to need to go out among the dangerous beasts to gather herbs and collect food. Weapons aren't an option, all you can do is outwit and outplan the enemy!
Advertisement:

This is the world of the bunny rabbits.

Bunnies And Burrows (written by Dr. Dennis Sustaire) is the fantasy game in which you play an intelligent rabbit. This game has been through two main versions over the years:

Bunnies and Burrows has long been recognized as a very inventive game. It was the very first roleplaying system to allow non humanoid characters, the first game to have a Martial Arts combat system (called Bun Fu), and the first game to attempt a skill system. Everything has been built with common sense and realism in mind. A lot of research went into the books and all illnesses, problems, and anatomical difficulties outlined are accurate. When it was released, it was considered "light years" more advanced than Dungeons & Dragons.

However, nobody took the game seriously because it's about bunnies. With no weapons, mythical creatures, or unrealistic magics, players were at a loss for what you could do inside the game. Many were mystified that you could make an epic adventure with rabbits and dismissed the idea as "too silly".

However, Bunnies and Burrows carries on as a cult classic due to its inventiveness, unique gameplay, and the fact it's all about bunnies. The game can be bought and downloaded here

Exactly What It Says on the Tin. They fight with Bun Fu.

The Medic. Only uses plants and keen senses instead of medicines and tools.

Basically a Ranger or a Ninja.

A rogue minus the thieving, they gather information and disarm traps.

Exactly What It Says on the Tin. They have visions and get mild psychic powers.

The following things are averted in Bunnies and Burrows, mostly because they tend to invoke Total Party Kill unless noted otherwise.