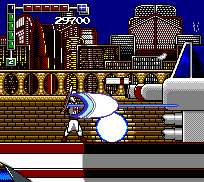 Cataegis: The White Wind is a retro PC action game released by Ácido Cinza in September 25th, 2015. When a deity named Ishtar descends with promises of eternal life for her worshippers, the secret order Caeliger sends their enforcer Cataegis to kill her and prevent a world-wide war.
Advertisement:

The game draws inspiration from classic action games such as Strider (Arcade) and Contra, enabling the player to swiftly cut enemies with one of four weapon types while dashing and sliding across Ishtar's Ziggurat. The storyline can take different turns depending on whether you spare or kill the bosses of each level.