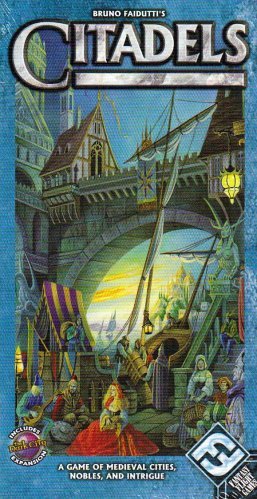 A game of medieval cities, nobles and intrigue.
Citadels is a French Tabletop Game first released in 2000.
Advertisement:

To play the game, the players must compete with each other to build a complete city with 8 districts (though the number can be reduced to shorten the game's play time). The game ends when a player completed their city, and the player with the highest amount of points wins.

The players begin each round by selecting 1 of 8 character cards, each possessing a particular skillset:

At the start of the game, each players are given 4 district cards, and they play their turns by the order of the numbers of their character cards. During their turn, the players can take the following actions: draw 2 more district cards or collect two gold pieces, use their characters' skills and, if they have enough gold pieces, build a district (unless they were killed by the Assassins, during which they would not be able to do any of these). After each round, the characters are re-shuffled, and the cycle begins anew.

Each district cards have a specific point value, based on their building cost (i.e. a district that costs 5 gold to build would be worth 5 points, though the point would only be counted if you actually build them). Each cards are also given different colour codes (red, yellow, green, blue and purple), which can give the players coin benefits depending on the character cards they have. The purple cards are "special districts" which have their own unique powers. Accumulated gold will not be counted to the players' final score.

Three expansion packs have been released: the "Additional character set" edition, which provides a set new characters that can be swapped in with the old cast based on their numerical counterparts, the "Dark City" edition, which adds 14 new purple district cards, and the "Circus" edition, which features new "Action cards" that offers new tactical advantages.

Additionally, the expansion has two characters with the number 9:

In the new 2016 edition, another 9 characters were added: