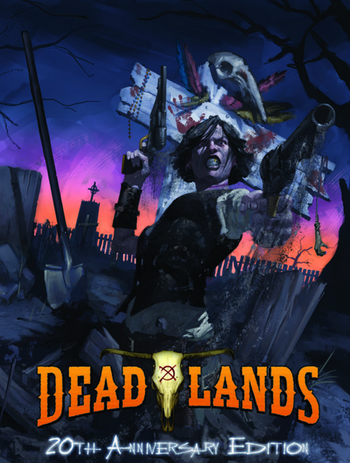 Deadlands Games and Settings
Advertisement:
The year is 1879, but the history is not our own...

, Deadlands: The Weird West Roleplaying Game was the first setting in what would become a trilogy. The brainchild of Shane Lacy Hensley, Deadlands was, at the time, praised as a breath of fresh air amidst the various Dungeons & Dragons and Old World of Darkness clones and derivative works. The rules were very detailed (to the point of being cumbersome, at times), and the setting was more so (to the point of being awesome, most generally). Since then, Pinnacle (and its affiliate, Great White Games) has begun re-releasing the settings with the much lighter (but less detailed) Savage Worlds rules system. This began in 2006 with Deadlands: Reloaded.

The material for Deadlands: The Weird West is extensive, covering approximately 30 or so full-length sourcebooks. GM's — "Marshals", in game parlance — were widely encouraged to research actual history and folklore to color in the details of their campaign world. Don't think the game's authors were slouches, though. July 3, 1863 was the date of the Battle of Gettysburg in the American Civil War. The interference of these new malevolent forces turned that battle to the favor of the Confederacy, and perpetuated the war for about 15 years. The setting is filled with historical Shout Outs. In 2020, they released a new version of the setting where the Confederacy fell during the battle of Washington DC in 1871, due to the time-traveling shenanigans of the sorceress Morgana le Fay.

In April 2020, Pinnacle hosted a crowdfunding campaign for a version updated for Savage Worlds: Adventure Edition, which hit its funding goal within the first day of the campaign. It was released in 2021 with a dramatic set of alterations.