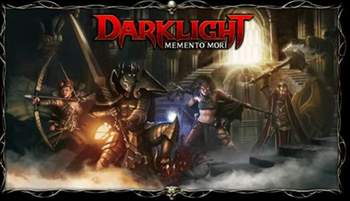 Darklight: Memento Mori is a Dark Fantasy Adventure Board Game of cooperative Dungeon Crawling. Inspired by the Diablo series, Warhammer Quest, Dark Souls, and Dante Alighieri, the game puts up to four players in the shoes of undead adventurers bound together by the Cursed Heart in service of the Grim Warden, the Angel of Death. These Accursed embark on quests, exploring themed and randomly generated dungeons and slaughtering hordes of vicious monsters for their souls.
Advertisement:

in March 2016 and shipped in March 2018. The rulebook and several other resources are available for download at Dark Ice Games' website