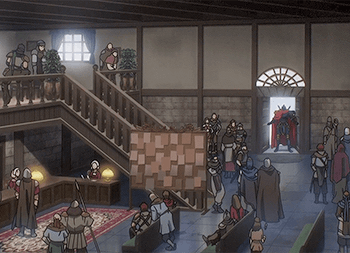 This is an organization, and we use the term loosely, that enrolls adventurers and gives them access to jobs. Jobs generally range from "find my cat" to "destroy Omega Volcano Satan", and are posted by random locals who can't, apparently, do anything for themselves. It's very likely that jobs will be ranked by difficulty, with precise but vague credentials required for more dangerous jobs.

Jobs generally are posted on a bulletin board (which may be an encrypted dataserver or a cork slab, depending on the setting), where certified adventurers sign up for them. "Certified Adventurers" is basically a euphemism for "freelance mercenaries" or, in more cynical terms, "murder hobos". The Protagonist will commonly be one because it is a convenient frame narrative for introducing side quests and plotlines. It can be used for everything from the Knight Errant to the Psycho for Hire to hidden royalty.

If Craigslist had a section labelled "Jobs wanted: Medieval Commando Squads", it would be one of these.

It is mainly a video game trope, but also shows up in anime, especially when the setting is a Role-Playing Game 'Verse. Mainly shows up in Japanese works, perhaps because the Japanese seem to feel that even killing people and taking their stuff should be done in a structured, social context.

A subtrope of We Help the Helpless, but there's something more specific here. It has to do with the concept of a medieval guild adapted to serve the needs of a video game.

Real-life guilds were established to safeguard their members from competition and outside economic forces and had official license from the government to be the sole tradesmen in a city; despite this, fictional guilds will often form rivalries and compete with each other in a quasi-market economy. This furthers perception of these groups being more akin to companies of mercenaries than actual "guilds".

One more thing: Although the main characters are commonly described as a guild, they usually don't have a common skill set. Fighters, mages, and thieves (and others) can all work for the same guild, but won't learn skills from each other. After all, that would make them similar, and What Measure Is a Non-Unique? (There are occasionally organizations that cater to these types, but then we get into politics.)

See also Weird Trade Union, Murder, Inc., Thieves' Guild. Compare Adventurer's Club, Creature-Hunter Organization and The Order, which has a more rigid structure and better-defined purpose, and Private Military Contractors, the modern mercenary company counterpart. Also compare Hero Academy, which focuses primarily on teaching students in successfully dealing with quests like those mentioned above (especially if such quests are strictly heroic) though may have some elements of Adventure Guild.