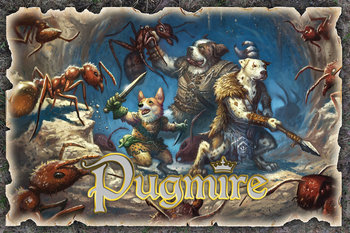 "Be a good dog."
— Central tenet of the Code of Man
Advertisement:

Pugmire is a roleplaying game published in 2017 by Onyx Path in partnership with Eddy Webb and Pugsteady. It takes place in a distant future where humankind has either gone extinct or left the world, leaving the various Funny Animals they uplifted to fill the void. While many different sentient races exist, the game focuses on the noble dogs of Pugmire and their rivalry with the secretive cats of the Monarchies of Mau.

The rule system is strongly influenced by 5th edition Dungeons & Dragons, with races (canine breeds divided into categories such as Companions, Pointers and Mutts) and classes (such as Artisans who wield ancient high-tech MacGuffins to achieve magical effects, Guardians who defend and inspire with sword in hand, and Ratters who seek out injustice with cunning and flair) forming the core of your character. Stories can consist of getting involved in noble intrigues, defending the innocent from Always Chaotic Evil monsters, seeking out lost technology in remote ruins, and just generally indulging in An Adventurer Is You.

The game falls strongly on the idealistic side, being described by the developers as "a light-hearted and family-friendly fantasy world." Player characters are assumed to be heroic champions of justice or at least Jerks With Hearts Of Gold, and the setting is described in colourful and mildly comedic terms. It's not entirely a Sugar Bowl, however - ferocious monsters roam the countryside, there is treachery and corruption hidden everywhere, and just what it means to be a good dog is something no two characters can entirely agree on.

A companion game, Monarchies of Mau, has been released, which spotlights the cats and their domains.

Tropes found in Pugmire include: