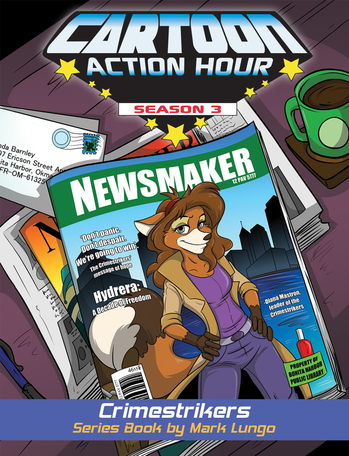 Crimestrikers is one of the series books from Cartoon Action Hour: Season 3. Created and written by Mark Lungo (except for the stats), and illustrated by various artists, the game centers on an elite team of international crimefighters who protect Creaturia, a World of Funny Animals, from a Rogues Gallery of Super Villains.

The story starts when Evil Genius Vance Coffin engineers a mass escape from the Quarry, an underground maximum security prison meant for Creaturia's worst criminals. He invites most of the escapees to join Outrage, the worldwide crime syndicate he once ran and intends to revive. CIPO (Creaturian International Police Organization), the setting's equivalent of Interpol, responds by forming the Crimestrikers, a team of eccentric but highly-skilled specialists who pursue both agents of Outrage and other, equally powerful villains all over Creaturia. The Crimestrikers are led by Diana Mastron, one of CIPO's best agents and an expert on Vance Coffin — because years ago, she almost married him.

Check out the character sheet (a work in progress) to learn more about the game's heroes and villains.

"No one's troping anyone today!"