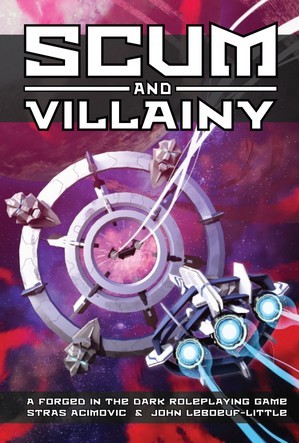 Scum and Villainy is a fiction-first Space Western Tabletop RPG, designed by Stras Acimovic and John LeBoeuf-Little (a.k.a. Off Guard Games) and published by Evil Hat Productions in late 2018. It was the first commercial release under the Forged in the Dark license, meaning that it runs on the Game System of John Harper's Blades in the Dark, but transplants the scoundrel crew from the Gothic steampunk of Duskwall into the Standard Sci Fi Setting of the Procyon Sector, inspired by everything from Firefly and Cowboy Bebop to Guardians of the Galaxy and, of course, Star Wars. You play a Cool Starship crew of smugglers, bounty hunters, and other troublemakers, making ends meet under the thumb of the oppressive Galactic Hegemony and the galaxy-spanning Guilds.
Advertisement:

Not to be confused with the eponymous supplements for Star Wars d6, Star Wars d20, or Star Wars: Roleplaying Game, which were all named after the same quote from A New Hope.