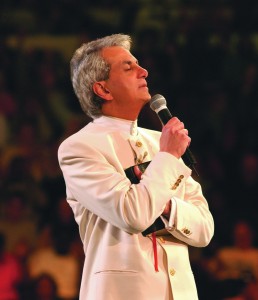 "The following program is made possible by generous gifts from partners of Benny Hinn Ministries and viewers like you in this area."
— This Is Your Day

Toufik Benedictus "Benny" Hinn (born 3 December 1952) is a Palestinian-born American evangelist and faith healer who heads a worldwide television ministry centered on his claims of channeling miraculous healing powers. The veracity of his healing claims, and the material wealth he personally enjoys at the alleged expense of his donors, has made him one of the more controversial personalities in religious broadcasting.

Known as "Pastor Benny" to his friends and "con man" to almost everyone else, he hosts regular "Miracle Crusades" held in major cities around the world, at which thousands of people with ailments ranging from cancer to HIV to physical disfigurement come in the hope that God will heal them through Benny. The highly-choreographed spectacles are broadcast on Benny's TV show This Is Your Day and religious stations like TBN.

But despite his loyal following, no evidence exists that any one of the miracles aired on his show are genuine. Many investigative news programs have looked into his claims and checked up on people that he implied were cured through his Healing Hands, only to find that they later died of disease. Not surprisingly, he has become a polarizing figure in U.S. Christianity, with all but a small group of Pentecostals condemning him.

Is known outside religious circles as an inspiration for Steve Martin's performance as Jonas Nightengale in Leap of Faith.

This program contains examples of: