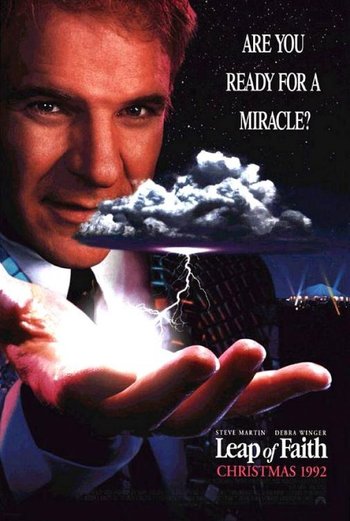 Martin, in a rare non-comedic turn, plays Jonas Nightengale, a cynical con man who makes his living as a traveling revivalist preacher and faith healer. When his convoy breaks down in a depressed small town in Kansas, Nightengale decides to set up his revival there, over the protests of the local sheriff (Neeson), who sees through his act and wants to protect the town. He has little trouble winning over the local population, but starts to find himself affected by their naive faith.

It was adapted into a Broadway musical, which earned unfavorable reviews from critics but still earned a Tony nomination for Best Musical.

Leap of Faith provides examples of: