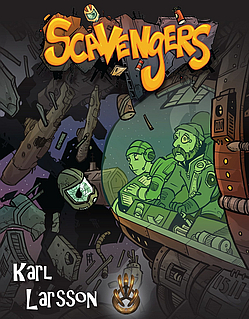 Scavengers is Sci-Fi Tabletop RPG in which the players take on the role of Scavengers, people not affiliated with a faction and simply exist to withdraw things before the proper authorities arrive.

In the Future, Humanity has colonized a large portion of space, and has divided itself into various factions, with each one competing against the other for resources.

When a battle goes ary, or a ship gets hit with a Negative Space Wedgie, the remaining portions of the ship(s) are left there until the proper rescue team from that place's native area can get there. During this time, the players need to go in, grab what they can find, and get out, before relief gets there.

While doing so, they are also vulnerable to all sorts of Phenomena (like a wormhole), problems with a broken ship (like an engine fire), or other typical Sci-Fi things (like a rogue AI). Each problem gets the character 1 or more danger points, and once they hit 10 of them, the Character dies.

on Kickstarter in 2015, becoming fully backed later on that year.